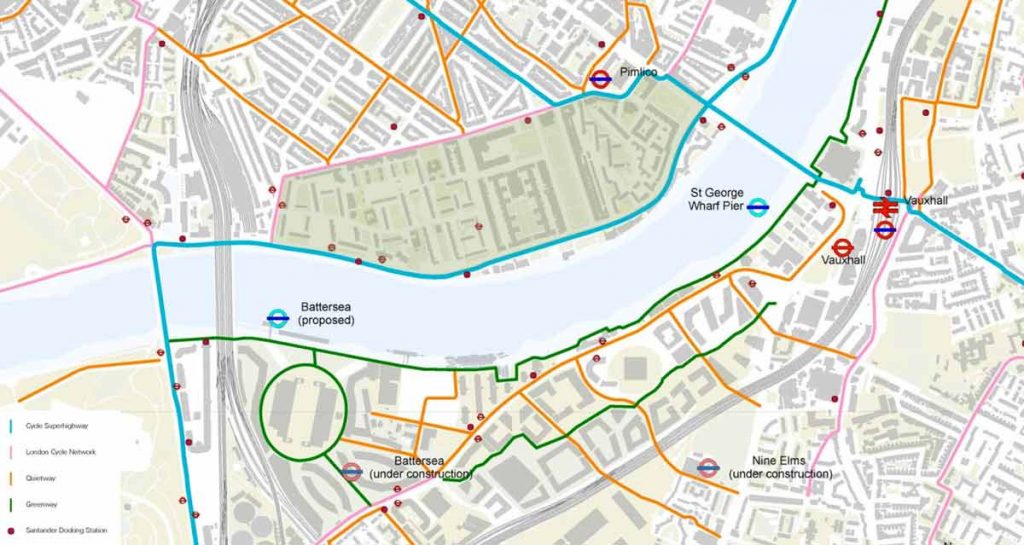 Wandsworth Council is putting on a series of Public Exhibitions to breathe new life into The Nine Elms Cycle Bridge which many had thought to be dead in the water after failing to gain any support from The Mayor of London and following Westminster City Council’s stinging examination of the proposition.

Please go, have a look and make sure you have your say about it. There will be three exhibitions North and South of the River. Details from the Cycle Bridge Website:

Exhibitions explaining the project are being held on both sides of the river to update local residents on the status of the project and the work that is currently being undertaken and to give them the opportunity to explore the project in more detail, ask questions and provide feedback at this early stage.

The exhibitions will be taking place at the following dates and times:

Here are some Nine Elms Cycle Bridge Talking Points that have emerged from a closer look at the proposal which seems still to be based on a 2013 speculative study by TfL.

Wandsworth and The Nine Elms Development team should seriously consider using the £26 million bridge money to provide truly affordable housing in the development zone. It might help to restore some of the tarnished reputations of both the Council and their development partners.

Please share your responses to this exhibition with us – Wandsworth and its project partners may need to accentuate the positive – tell us in the comments below or via the Contact page. If we hosted our own Bridge feedback form, would you use it?

The Bridge Project Team has been contacted for fact-checking and clarification. This article will be updated when they respond. Please revisit this page or join the mailing list.