“Imagine if we could invent something that cut road and rail crowding, cut noise, cut pollution and ill-health – something that improved life for everyone, quite quickly, without the cost and disruption of new roads and railways. Well, we invented it 200 years ago – the bicycle.

Helping cycling will not just help cyclists. It will create better places for everyone, even if they have no intention of getting on a bike. It means less traffic, more seats on the Tube, less competition for a parking place and fewer cars in front of yours at the lights.”

Those are the first words of Boris Johnson’s ‘Vision for Cycling in London’, published this March, in which the Mayor announced that he would be creating a new network of cycle routes catering for the huge growth that there has been in cycling, particularly in zone 1. During the morning rush hour, 24 per cent of all vehicles on the roads in central London are bicycles. Boris Johnson has appointed me as his ‘cycling czar’ to help deliver that new network; I asked for a uniform, preferably with epaulettes, but he said “No”. One of the new routes we’re planning is in Pimlico, and two weeks ago FREDA, the Federation of Pimlico Residents’ Associations, kindly invited me to come and talk to residents about it. It’s cycle superhighway CS5 which was planned to come from New Cross and Peckham, over Vauxhall Bridge and up Vauxhall Bridge Road, ending at Victoria. Nobody liked that idea much, frankly. We would have had to remove some general traffic space on Vauxhall Bridge Road. Both Westminster City Council and local residents feared that that would cause extra congestion on the road itself, and lead to rat-running through Pimlico’s residential streets.

I didn’t much like the prospect of cyclists using Vauxhall Bridge Road, which is extremely busy and in the northbound direction requires you to cycle into the middle of the road, often in heavy traffic, to avoid being taken left into Drummond Gate. There’s also the Victoria end itself, which requires cyclists to navigate one of central London’s worst gyratories, especially chaotic at the moment (and for years to come) with the station rebuilding works. So we have come up with an alternative, which is to go left into Drummond Gate and take the route up Belgrave Road, over Eccleston Bridge, up Eccleston Street and on into Belgravia. Belgrave Road carries less than a third of Vaxhall Bridge Road’s traffic, about 8,000 vehicles a day, and only a fifth the number of HGVs. It is far more pleasant than Vauxhall Bridge Road. Above all, it allows cyclists to reach a much wider area north of Victoria – and much of Victoria itself, via Buckingham Palace Road or the Ebury Street cycle track – without passing through the gyratory system at all. And it doesn’t have the traffic impact that the Vauxhall Bridge Road route would have done. Because Belgrave Road is fairly quiet, we wouldn’t need to make any changes to the road, apart from intermittent markings – square symbols every so often on the road surface to reassure cyclists that they were on the right route. There wouldn’t be any continuous lines of blue paint. There wouldn’t be any physical change to the vast majority of the road. There wouldn’t be any changes to the bus stops. And there wouldn’t be any loss of parking. The only thing we would need to do would be to install a contraflow southbound cycle lane at the very top end of Belgrave Road, between Gillingham Street and Bridge Place where it is one-way northbound for motor traffic, and also do something similar across Eccleston Bridge and into Belgravia. 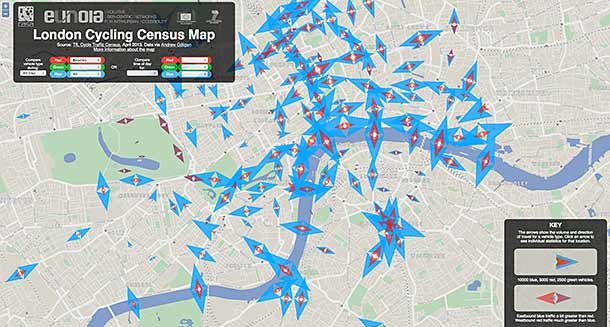 How many cyclists would use the new route? It’s hard to put an exact figure on it, but a total of about 1600 a day, an average of 30 cyclists an hour in each direction, currently use Vauxhall Bridge Road, while 340 a day use Belgrave Road. This compares with 25,500 motor vehicles a day on Vauxhall Bridge Road – an average of 530 an hour in each direction – and 8,100 a day on Belgrave Road. I would expect that a substantial proportion, but not all, of the cyclists currently using Vauxhall Bridge Road will switch to the new route. So adding the switchers to the existing users, Belgrave Road might see perhaps 1600 a day, say 30 an hour in each direction, one every two minutes, though usage of course isn’t spread evenly throughout the 24-hour period and these averages will be higher in the peak hours. I was delighted with the level of support that the plan got from the FREDA membership. We’ve also got strong backing from Westminster, whose cabinet member for transport, Cllr Ed Argar, helped to set up last month’s meeting. But there is more work to do in hammering out the detail. Neither the council nor I have detailed plans yet because we both know that things like this work best when residents help us draw up the plans from an early stage, rather than being presented with some bureaucrat’s fait accompli drawn up without their involvement. So that’s what comes next: I have asked FREDA’s chairman, Edward Reeve, to nominate a working group to work with us and Westminster City Council on the plans, and I would be very keen to hear the views of any readers too. Thank you once again to FREDA for inviting me!

The above letter from Andrew Gilligan originally appeared on WarwickSquarePimlico.co.uk on 01 Nov 2013.

JUST RELEASED – Westminster Cycling Strategy Consultation December 2013: Westminster City Council have released a draft Cycling Strategy and has asked for feedback and comments. It’s not very user-friendly and their map is a really terrible (I needed to rotate it), but please persevere! Westminster have set out their cycling plan, including the Westminster Cycle Grid and Quiet Routes, and amongst the spaghetti appears to be a new proposal to extend CS5 (or CSH5 in Westminster nomenclature, for some reason) all the way up to Belgrave Square via Belgrave Road, rather than ending at Vauxhall Bridge and using Belgrave Road as an informal non-Superhighway link. 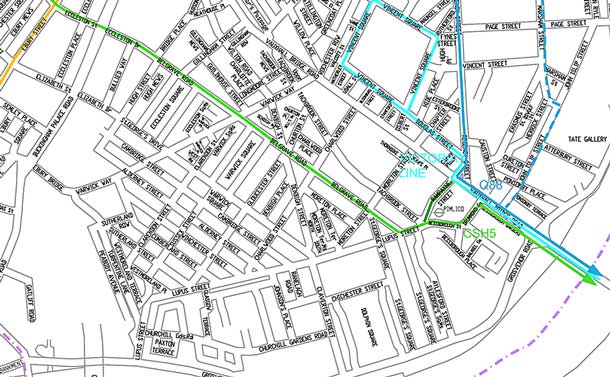 I did a search for ‘Belgrave’ on the main consultation document and came up empty-handed. There’s nothing I can find on whether the Pimlico bits will be segregated, mandatory, advisory or just paint and the route originally using Vauxhall Bridge Road through Victoria seems to have been finessed onto Bessborough Street and Belgrave Road. So, if anyone can enlighten us, please get in touch or comment below. The consultation mainly consists of an online survey, which local residents should seriously contemplate filling out. You need to do this before 20th January 2014 if you want to make a difference, even if you’re a non-cyclist. Be aware that the survey is swaddled in Council agendas, so take the opportunity to raise local Pimlico issues wherever you feel appropriate. Much more effective would be a paper letter to Westminster or your MP – please get in touch for details of how to do this.

I’ve plotted the new routes proposed by FREDA together with the proposed Nine Elms to Pimlico Bridge options:

View a larger version of New Bridge at Nine Elms on Google Maps.

Take a look at section 5.2 p28 & p32 of the PDF (direct link). These correspond to options 1 and 4 on our map. The strategy sketches out the Nine Elms cycle network in Wandsworth but stops when it gets to the North bank of the Thames. Presumably it would be up to Westminster and TfL to sort out how it would integrate with the leafy garden squares of Pimlico. House of Commons Transport Committee 2/12/2013: Enquiry into cycle safety 2nd December 2013. Gilligan’s session starts at 56:30 if you want to scrub forward to that point.